Where to Zoom – IT Support Episode 112

Captain Christian tells about a post on LinkedIn he was reading, where a passenger on a train had to witness several other passengers all trying to sign into the same group online meeting. He says, considering we’ve been using online meeting platforms for over two years now, it seems there are still plenty of pitfalls with regards to online meetings we still fall into.

If you would like to check out any of Captain Christians other videos on how to run online meetings, just click. 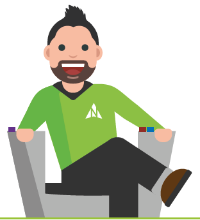 But we’re back to Zoom.

I was watching a posting on LinkedIn. Someone was having a little bit of a moan that they’d been on a commute and there’d been a group of work colleagues that were clearly all trying to sign in on a group meeting, all at the same time, in the same carriage, on the train, with no headphones in.

Now, there are a number of issues with this.

First of all, why were you not somewhere quiet to do that meeting. Internet coverage on a train is not going to be perfect.

Number two, I am absolutely certain the rest of the people on that train did not want to hear the ins and outs of your meeting. And if there’s anything confidential, it should not have been broadcast to the train.

Mistake number three, if you’re all logging in without using a headset of some sort, you’re going to get feedback.

Having an echo of a number of delegates, all with the same microphones and headphones, in the same room, at the same time, will not be a pleasant experience.

So, considering how many times I’ve recorded videos about how to run online meetings and considering we’ve all been victims of this platform for two years, it seems there are still plenty of things to get used to.

Make sure, to choose your setting, choose your background, have a headset, and do remember, if you’re discussing sensitive information that there isn’t an audience listening to your call.

If in doubt, think, before you Zoom!