The right tool for the job – IT Support Episode 63

Is your computer a tool for a job, or something to help dress a room?  When you’re selecting a computer to help you excel in your work, how would you ideally choose that tool?  Let’s face it, it is a tool to do a job.

Captain Christian has focused on this important topic this week, as too many people over his years in IT have been swayed from the right path to the pretty path.  In a worst-case situation buying something they had no idea how to use, and then showing it on eBay and starting all over again.

Watch this vlog to find out more. 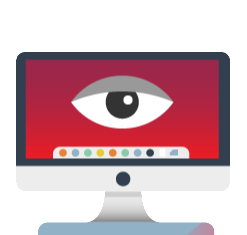 If you prefer a read…

“The right tool for the job” – IT Support Episode 63

So this morning I had an email from one of our clients who wanted to buy a new computer monitor. So Tom, this one is for you!

It’s not specifically what Tom said, it actually reminded me of a conversation I’ve had time and time again. It’s for those people who wander in
obsessed with wanting to buy an Apple Mac and the reason quite often comes down to two things.

One, they’ve got an iPhone, or an iPad, or both and they rather like those and they think, well, it’ll make perfect sense to go and get a Mac as well or the other one is because it looks pretty. I have to admit there are plenty of designers out there in the computer world that would do better if they took a leaf out of Apple’s book and designed Windows based computers to look a little more pretty, however plenty of people buy an Apple Mac thinking it will either be the same as the operating system that runs on an iPhone and iPad or is as simple or as familiar as using Windows, and I don’t know about you but I’ve been using Windows now for… over 30 years!

Oh dear, where did that time go?

Using it is seamless and intuitive for me, however when I use an Apple Mac it’s anything but, I’ve actually described it as like, wading through mud.

So when you’re selecting your tools for the job, do remember it’s more than aesthetics and when it comes to a screen Tom, what are you spending time looking at, what’s on the screen or the frame that’s around it?

So to quote a line from a friend of mine, “sometimes it’s all fur coat and no knickers”.

So make sure you buy the right tool for the job.