So do you go completely wireless? It’s a question we’ve been asked for years, and we’re sure we will be continued to ask for years to come.

Want some useful and basis advice?  Well watch this week’s vlog as Captain Christian talks about which way you should go when considering the move to wireless and his most important bit of advice that is still relevant now as it has been since the introduction of wireless data networks. 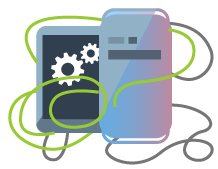 You can also subscribe to the vlog on all of these popular social media channels, this way you won’t miss any future episodes or advice from Captain Christian as it is uploaded.  You’ll be notified as each episode is released, week after week on your preferred channel.

Hi, I’m Christian from “Northstar IT”, and this week I want to talk about wires or wireless?

So I want to put yourself in the shoes of a business owner who’s moving office. Of course this can apply at home too. You’re going to move house and you’ve got big plans for that new property and the first thing you think, we can just go wireless on everything!

Well, that’s not entirely true. A wired network runs faster and has much more bandwidth which means you can squeeze more stuff down the cables than you can through the airwaves. There are also a number of devices still commonly used which don’t work on wireless without additional bits of kit and I’ll give you a simple example, a telephone!

When it comes down to a wired network it really means it’ll work faster and better for you. There’s a simple rule I always say to any client I have this conversation with. A wireless network should be a supplement to a wired network and not a replacement.

But if you want some extra advice, speak to your IT people. I’m sure they’ll be able to point you in the right direction.